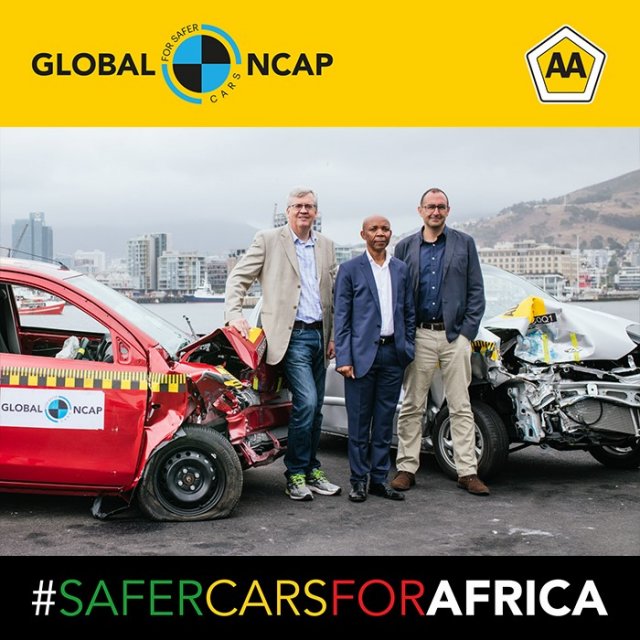 Global NCAP and AA South Africa launch #SaferCarsforAfrica today (22) in Cape Town, with the first independent crash test assessment of some of South Africa’s most popular compact and small cars. The crashworthiness results of the five cars tested show a wide range of safety performance, from four to zero stars for adult protection, with the lowest ratings resulting in a high probability of life threatening injury in a road crash.

The models tested include South Africa’s best-selling car, the VW Polo Vivo. The Datsun Go+, Toyota Etios, Renault Sandero and Chery QQ3 also underwent the safety assessment. Combined sales of these five cars account for around 65% of all the new cars sold in South Africa last year. Global NCAP chose the entry-level version of each model and as a result one of them was not fitted with airbags as standard. The results highlight differences in the structural integrity of the vehicles tested.

Lauchlan McIntosh, Chairman of Global NCAP, said: “In 2016 the United Nations General Assembly adopted a road safety resolution which recognised the important role NCAPs play as a catalyst for improving vehicle safety standards. The UN has sought to encourage the spread of NCAPs across the regions and automotive markets of the World and today, in Cape Town, I am delighted that Global NCAP is helping to achieve that goal with the launch of the first ever crashworthiness programme for cars sold in Africa. Global NCAP has provided assistance to launch similar programmes in South America, India and the ASEAN region, programmes which have led to the delivery of safer cars into those markets over the last five years.

“Working closely with our partners at the Automobile Association of South Africa and with the welcome support of the FIA Foundation and Bloomberg Philanthropies, our new campaign is an important first milestone on the road to Safer Cars for Africa.”

Collins Khumalo, CEO of the AA of South Africa said: “The crash tests represent an important step in road safety in South Africa. We believe consumers have a right to know what the safety ratings are on the cars they want to buy. These results are critical to educating the public about vehicle safety, but, more than that, they empower road users to make informed decisions. In the same way emissions and green ratings are displayed on vehicles, we think safety ratings should also be displayed on vehicles, and we don’t believe this should be too much of a challenge to make happen.

The involvement of Global NCAP, the FIA Foundation and Bloomberg Philanthropies in bringing these results to Africa, indicates how seriously our partners view road safety, and it is incumbent on us, as South Africans, to consider road, and vehicle safety, in the same way.

David Ward, Secretary General of Global NCAP said: “It is good to see a four star result in these first ever African crash test ratings. However, it’s extremely disappointing that there’s a zero star car. Such a poor result shows why it is so important for countries like South Africa to fully apply the UN’s crash test standards.

Saul Billingsley, Executive Director of the FIA Foundation said: “These first independent car crash tests in Africa are a safety milestone, which the FIA Foundation is proud to support. The range of results show that consumers have a real choice, and with access to the right information they can use purchasing power to reward carmakers who put safety first. If we are to reduce road traffic injuries here in South Africa, and contribute to the overall United Nations development target of halving road deaths globally, safer cars for Africa must be a top priority.” 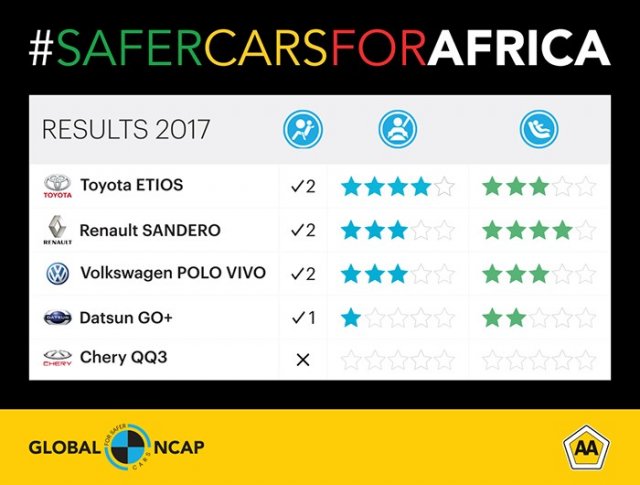 Ahead of legislation we would urge all auto makers worldwide to voluntarily commit to eliminate the production of zero star cars.

Global NCAP has awarded a separate child safety rating to each car in order to highlight the different levels of protection vehicles provide to passengers on the rear seats. Because the only safe way for young children to travel is properly restrained in a child seat, the assessment checks how compatible the car is with the child seats recommended by the manufacturer, as well as the protection provided in the crash test.

In the assessments, some of the child seats recommended by manufacturers were found to be incompatible with their vehicle’s belt system. In the Polo Vivo, Chery QQ3 and Datsun GO+ there was no three-point seatbelt on the rear centre seats and no way to safely install a child seat or transport a small child safely in that seating position. Only the Toyota Etios and Renault Sandero offer Standard ISOFIX anchorages for the outboard rear positions and three-point seatbelt for all passengers facilitating minimum conditions to safely install a child seat.

Datsun GO+
The GO+ achieved a one star rating for its poor adult occupant protection mainly in the Driver chest in the frontal crash test at 64km/h. The vehicle structure was rated as unstable, steering wheel movement, even though a steering wheel airbag was fitted, recorded high compression to the chest of the driver dummy. There was no airbag for the passenger. The Datsun GO+ achieved a two star rating for child occupant protection using the child seats.

Chery QQ3
The QQ3 achieved a zero star rating for its poor adult occupant protection mainly in driver’s head and chest. The vehicle structure was rated as unstable as showed collapsed in some relevant areas during the impact. Injury impacts recorded in the dummy head and chest in particular led to this result. There were no airbags for the adult passengers. The manufacturer did not recommend specific child seats which explains most of the points loss for child occupant protection. The QQ3 was given a zero star rating for child occupant protection, considering the poor vehicle readiness to safely accommodate the child seats

Launched in 2011, Global NCAP serves as a platform for cooperation among NCAPs worldwide and to provide financial, technical and advocacy support to new programmes in emerging markets.

Global NCAP is a UK registered charity and its largest sources of funding come from the FIA Foundation and the Bloomberg Philanthropies. It works closely with the Towards Zero Foundation and leads the Stop the Crash Partnership.

Global NCAP has consultative status with the UN (ECOSOC), is a member of the UN Road safety Collaboration and an observer at the UN World Forum for Harmonisation of Vehicle Standards.

About the FIA Foundation

The FIA Foundation is an independent UK registered charity which supports an international programme of activities promoting road safety, the environment and sustainable mobility. Our aim is to ensure ‘Safe, Clean, Fair and Green’ mobility for all, playing a part to ensure a sustainable future through: