Breakdown of petrol costs in SA 2021

The Automobile Association (AA) does not regulate or adjust fuel prices in South Africa, nor does it have any input in how the fuel prices are calculated.

Fuel prices are officially calculated and adjusted on the first Wednesday of every month by the Department of Mineral Resources and Energy. The DMRE is the only entity which regulates, sets, and adjusts fuel prices in South Africa.

As a public service to consumers, the AA publishes two fuel price outlooks monthly – one mid-month, and one at the end of the month before the official announcement by the DMRE is made, usually two or three days before the first Wednesday of the new month.

The AA publishes these forecasts to alert the public of looming changes to fuel prices, and the reasons for the changes. The AA relies on publicly available fuel price data from the Central Energy Fund (CEF) to compile its forecasts – a fact which is mentioned in every fuel price outlook issued by the AA. Along with the information relating to fuel price adjustments and providing context for them, the Association often provides useful tips to road users on how to conserve fuel, and tips for saving on fuel expenses.

Petrol users across South Africa are paying around R5 a litre more for fuel in May 2021, compared to May 2020. These increases come off the back of significant fuel price increases throughout the first few months of the year, which saw fuel reach record highs in April. Although fuel prices dipped a little in May, the fuel price remains high, affecting all sectors of the economy. Filling a 50-litre tank with petrol in South Africa costs just more than R250 in May 2021 than it did in May 2020.

South Africa’s fuel price is comprised of many different elements, some of which make fuel in the country more expensive than in neighbouring countries to which South Africa exports. To understand the different elements which comprise a litre of petrol locally, the Automobile Association (AA) publishes an annual fuel price breakdown to give consumers a snapshot of the composition of a litre of petrol inland and at the coast.

The figures are based on 93 Octane fuel (inland) and 95 Octane (coastal).

The costs are calculated using May fuel price data which incorporates the annual increases to the two main taxes paid on every litre of fuel namely the General Fuel Levy (GFL) and Road Accident Fund (RAF) levy.

Increases to these taxes are announced by the Finance Minister in his annual Budget speech in February and come into effect in April. The AA has always raised concerns that increases hurt the country’s poorest citizens, particularly as many of these citizens rely on public transport; an increase to the levies inevitably results in an increase to public transport rates.

Increases to fuel prices also mean an increase to goods which are transported across the country as operators recover these higher input costs through increases which are passed on to consumers.

In addition to publishing the 2021 fuel price breakdown, the AA emphasises key points it made to the Parliamentary Portfolio Committee on Mineral Resources and Energy in mid-April. The Association was asked to make representations to the Committee on how to mitigate rising fuel costs in South Africa.

Among the key recommendations made by the AA to the Portfolio Committee on measures to mitigate rising fuel costs are:

The fuel price in South Africa is comprised of four main elements: 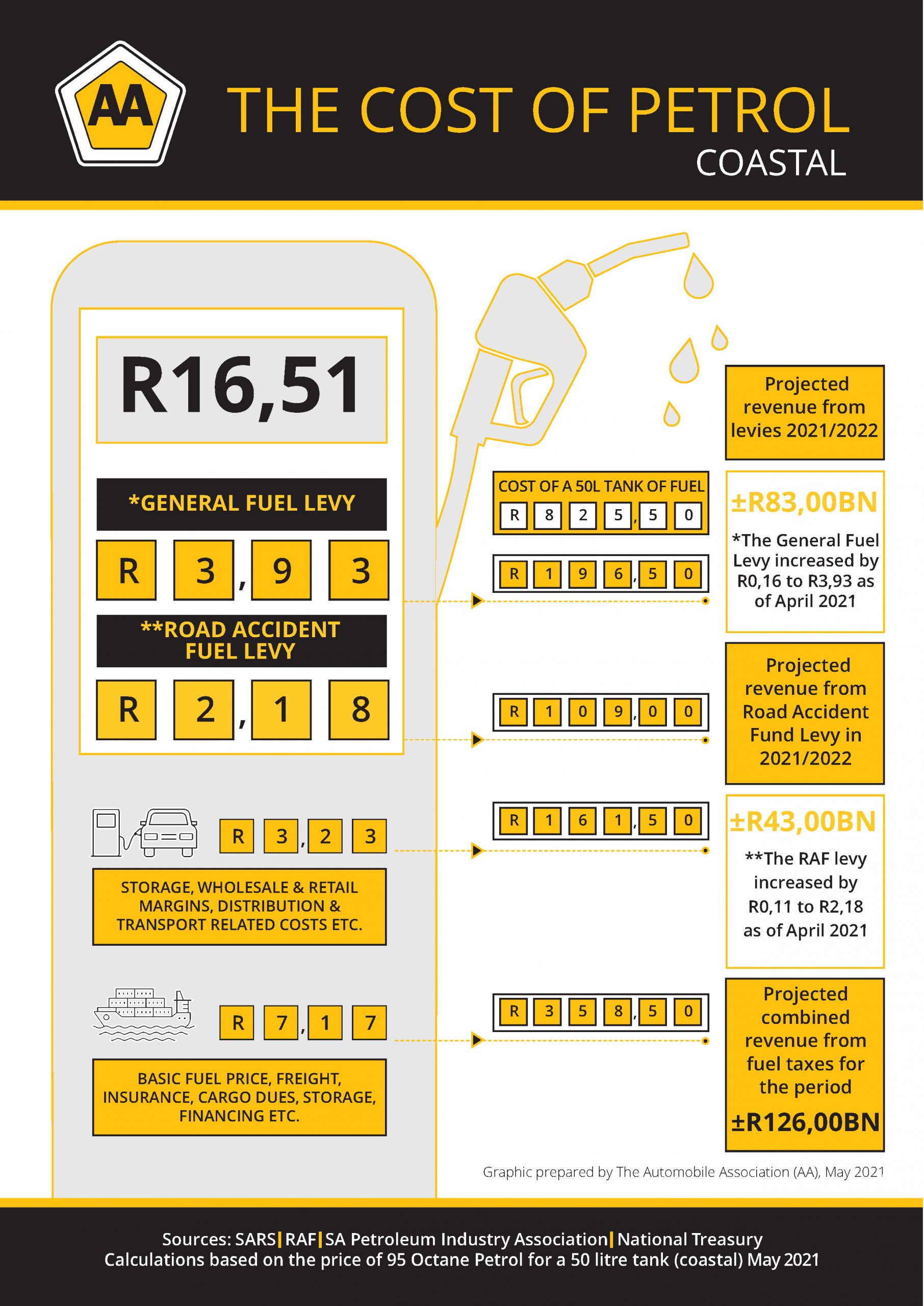 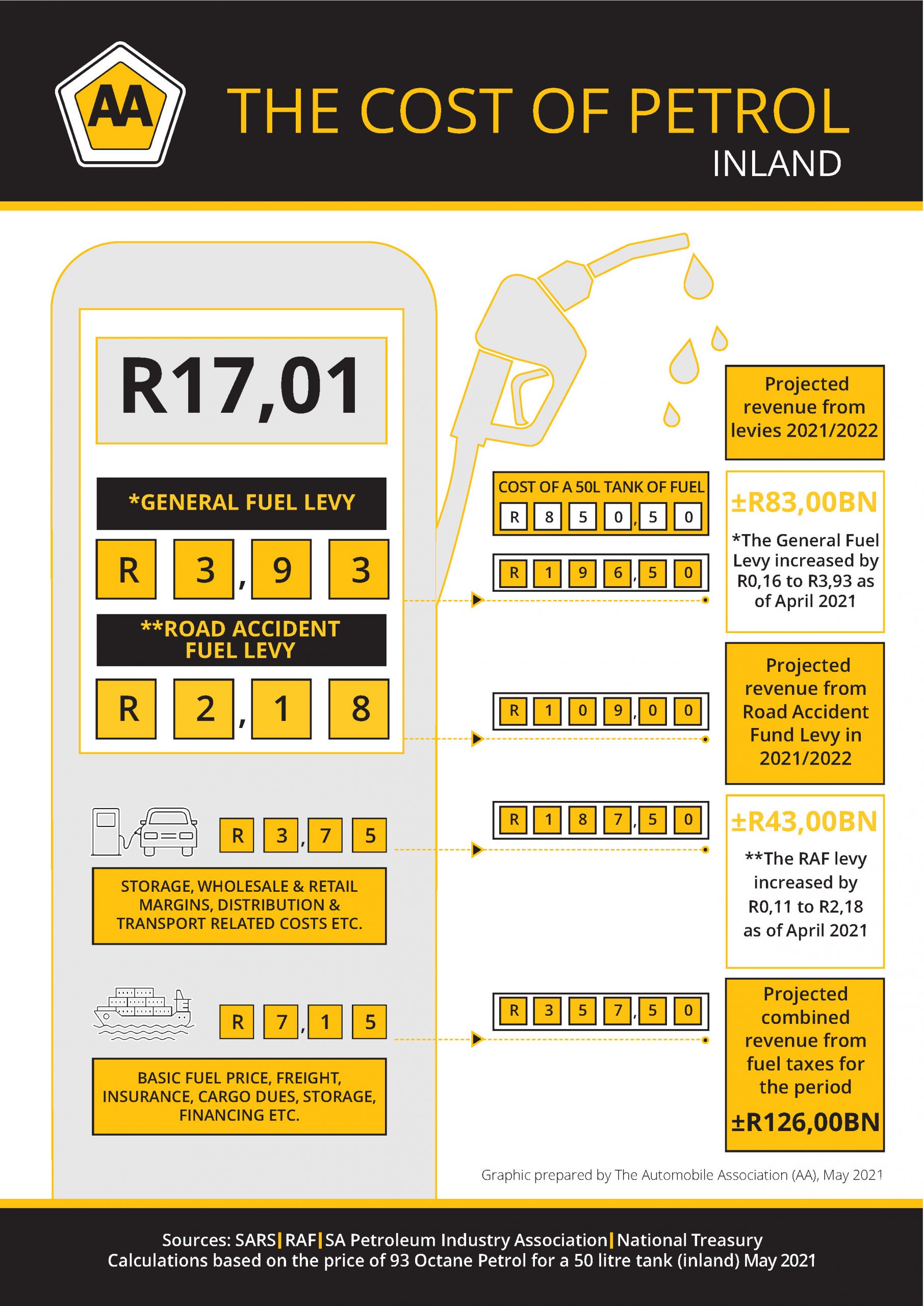 Combined the GFL and RAF levies total R6.11 (for both inland and coastal prices), a 27 cents a litre – or 4.64% – increase from 2020. Last year, when fuel prices experienced record decreases, the combined levies comprised much less of a percentage of the total fuel price.

In South Africa the fuel price is adjusted on the first Wednesday of every month and is determined by two main factors: The Rand/US Dollar exchange rate (how fuel is purchased), and international petroleum prices (how much the fuel costs to purchase).

The Basic Fuel Price (BFP) is calculated based on costs associated with shipping petroleum products to South Africa from the Mediterranean area, Arab Gulf, and Singapore. These costs include insurance, storage, and wharfage (the cost to harbour facilities when off-loading petroleum products into storage). The current BFP is R7.15, significantly higher than in 2020.

Other costs associated with the petrol price include transport costs (from the harbour to inland areas, which accounts for the difference in price between coastal and inland prices), custom and excise duties, retail margins paid to fuel station owners (currently R2.22 on every litre sold), and secondary storage costs. These costs currently total R3.75 for inland petrol and R3.23 for coastal petrol.

Last year the AA forecast that as economic activity throughout the world picks-up following COVID-19 national shutdowns in many countries, the price of fuel would also increase. This has happened with South Africans now paying significantly higher prices at the pumps than they did last year.