The ELVS Report is produced following a desktop research methodology. The value threshold for vehicles considered is raised from previous years to R270 000. Thirty-eight vehicles are included in this year’s Report and are assessed for the safety features stated in written literature of the vehicles in available printed or online brochures. The Report does not considered the structural integrity of the driver/passenger compartment. 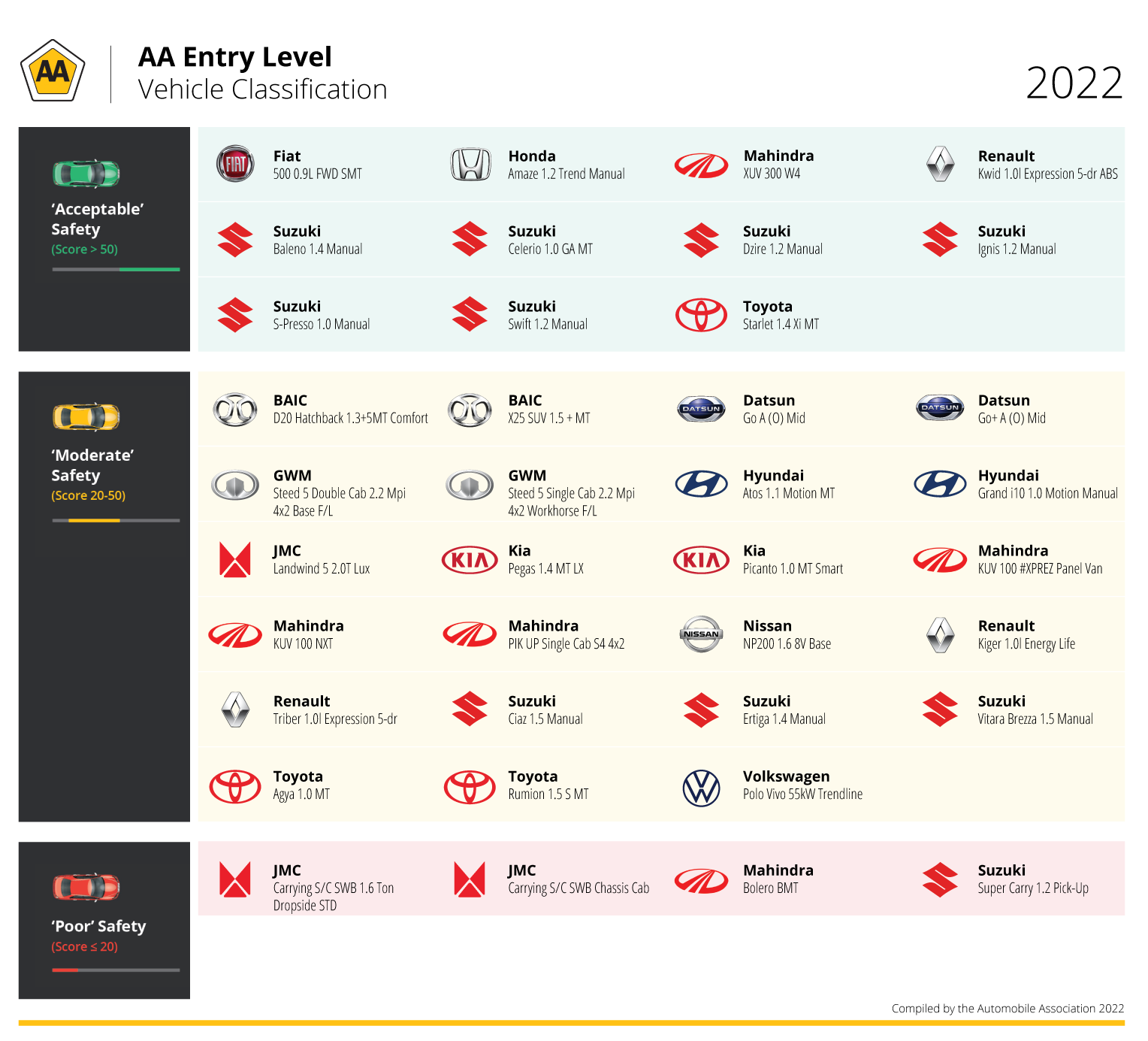 “The fact that so many vehicles offer moderate or acceptable safety is extremely encouraging and indicates that manufacturers are taking the presence of critical vehicle safety equipment seriously. This is a good trend, and we hope to see even fewer vehicles in the poor category in the years ahead,” says the AA.

Two important figures provide context for the development of the ELVS: South Africa’s high annual road fatality figures, and the growing vehicle population in the country. In 2021, the country recorded 12541 road fatalities. The current vehicle population in the country – according to official figures from the Road Traffic Management Corporation (RTMC) – is 11 726 476, with just over 7.6 million being motor vehicles and just over 2.6 million being LDVs/Bakkies.

“The purpose of the research is to provide consumers with a starting point for vehicle purchases, be they new or second-hand. We point out what safety features are stated as being available on these vehicles and urge consumers to consider these a priority as part of their decision-making process,” says the AA.

The Association points out, however, that this research does not provide a definitive measure of a vehicle’s safety which can only be determined through crash-testing.

“The data presented in the ELVS, nonetheless, provides an indication of a vehicle’s safety equipment. The large vehicle population and the country’s high road fatality figure point to a need for extensive road safety education and the need for better road safety management in the country. They also point to a need for consumers to prioritise safety in the vehicles they purchase. The ELVS Report should serve as a basis for their research,” the AA says.

Of the 38 vehicles researched in 2022, 34 are equipped with Anti-lock Braking Systems (ABS) and 33 are equipped with driver and passenger airbags. Despite this positive showing, only seven vehicles researched have Electronic Stability Control (ESC). The least common safety feature was curtain airbags (no vehicles) and side airbags (only one vehicle).

In 2019, the AA supported the #StopTheCrash partnership to demonstrate the effectiveness of, amongst other technologies, ESC and ABS. The technologies which were showcased have the potential to save thousands of lives every year, and the United Nations has developed international standards to help encourage countries around the world mandate these life-saving technologies.

“The inclusion of these safety features protects motorists, it’s as simple as that. The inclusion of ESC, for instance, must be considered more seriously by manufacturers as this is proven technology which can reduce road crashes. We reiterate our call that this technology come as standard for entry-level vehicles available in South Africa,” says the AA.

The AA notes that this is desktop research and that the definitive measure of a vehicle’s safety can only be acquired through crash testing. Similar to the Datsun Go+, the Nissan NP300 would have scored highly in this research but it scored zero stars in the Global NCAP crash testing. The data presented here should be used as an indication of a vehicle’s safety equipment, and not as the sole indicator of the vehicle’s overall safety rating.

In addition to scoring the vehicles purely on safety features and awarding true safety points, the ELVS Report also considers safety weighed against affordability. In this scenario, the score achieved by a vehicle for its safety features is measured against its cost to arrive at a Safety/Affordability Score. The Index can be used as a guide to understand the “Affordability of Safety” proposition of vehicles.

A complete breakdown of the Affordability/Safety Index, and the methodology used to calculate the scores is contained in the ELVS Report.

PLEASE NOTE: The links to the AA 2022 ELVS Report as well as to #StopTheCrash contain collateral which is free to use.

Join the conversation on Social Media: